skip to main | skip to sidebar

I cussed at camp today...

So for the first time in two weeks I totally used a cuss word today. I will say it was very warranted. Let me give you all a little scenario. I am one of maybe 4 mormon's here at camp and so I am trying to really keep my language clean. Well, today I had just finished taking a nice shower. I had just put on my garments and as I went to grab my bra I looked down at my boob--they tend to be in the way--and there was a huge thing crawling on me! As I investigated further it was a gigantic spider! Seriously huge! I screamed probably at the top of my lungs s@$! and flew around my room looking for something to save me!

At this point one of my cabin mates who has heard me screaming (yes, I kept screaming during the entire time---I know, I know) and comes out of her room. I run over to this woman I barely know yelling at her to get it off repeatedly. Now little background on this woman, she takes 5 minute showers, she is all natural and her job is basically called campcraft--she leads kids on hikes, camping, all outdoors and I am screaming like a freaking banshee about the giant spider on my boob. Ya. talk about mortified even more. Oh and during the year she even lives at like a campground place in Cali and takes schoolkids all over Yosemite and stuff.

So she calmly removes the spider onto her hand--and goes "hmm, I wonder what kind of species this is" as she walks it outside. Really? What species! It was on my freaking Boob! I, still frantic, smartly replied, it is the kind that lives in my freaking underwear drawer! Then I kept apologizing for swearing and scrfeaming like a mad woman. That is my life at camp as of today. Spiders. Bugs. And as of 1 this afternoon, kids. I am a wreck! YAY CAMP!
Posted by cami rocks the blog at 9:02 PM 3 comments:

So I only went to a coed sleep away camp once in my lifetime--it was called clear creek and I think I was in the 6th grade or something. It was only for a week but that was enough. I had a horrid memory come back to me this morning as I was showering (in our shower with no curtains...classy).


I remembered that this one time, at sleepaway camp, I was one of the silly girls who had developed early and thought it would be super cool to take a shower and on the way back from the shower to not only go in my towel but to be sure and walk by the boys bunks. It was night time, they were all getting ready for bed and so my friends and I all went to the shower house. They had all decided to do the same as me, going in the towel and such but they all chickened out. Not me of course. I was fearless. Yep, not stupid, fearless.

Anywho, picture this, evening, me, the girls, towel, holding all my shower stuff, walking by the window of whoever it was I liked at the time, him, looking out the window at that precise moment, me...being amazing, tripping on a log as I try to flip my wet hair instead of watching the trail, dropping my shower stuff and letting go of my towel. Oh yes, the towel, he saw me...and I mean SAW.

Anyways, today in the shower I had a flashback and thought, hmmm, maybe I will share. Just one of many of the humiliations in my wonderful, amazingly, blessed life!
Posted by cami rocks the blog at 7:28 PM 2 comments:

So, I have been at camp for just overf 24 hours...and it is freezing tonight by the way. It isn't bad. There are a lot of bugs, the piano is out of tune, everybody already knows somebody else because they are either returning or working here with a friend, but it is doable. The area is beautiful and when I figure out how I will post some pictures of the camp. The people are really nice but you knwo when you can tell that people are forcing it because they feel like they have to be nice and then the conversation lapses into that really uncomfortbale dead air...ya that is how today has been for me. AWESOME!
However, I have't been super outgoing myself. I have been nice and friendly, but again, it just feels forced. Don' t get me wrong, there are some freaking aweosme people here, my A-TEAM (also know as the arts group) are really cool and nice but it just seems to already have so many little clicks. I hate clicks. Hate. But it is all good and fun and the setting could not have been more beautiful. I know I am where I need to be and maybe I'll learn something about myself. Like today for instance, I learned that I freaking hate biting flies and I get into these wierd kill the bugs frenzys. It is super! Well, I will keep you all posted. Take care and I love some of you...you know who you are in case there are any random stranger reading it...
Posted by cami rocks the blog at 9:15 PM 1 comment: 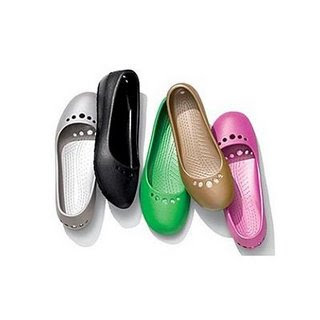 So these shoes are like the really evil version of Birkenstocks. I used to wear those in high school and I loved them, along with all the hippies, and zoobies (only I did not wear them with socks!). So I needed some light shoes for camp that can get wet that are less than a billion dollars (chako, keene, etc) and so I gave in to this un-natural shoe--Croc. They are bright blue. And they aren't the normal croc style, they are the lindy style or something. The sick part is, I think they are really cute--they make me think of the jelly shoes I LOVED in elementary school. Anywho--I gave in...and I like it!
Posted by cami rocks the blog at 6:07 PM 1 comment:

Circuit City is EVIL! AS you might have previously read, my camera is a p.o.s. I went to return it to the store forever ago when I got back from Europe since it froze on the Eiffel Tower after 2 weeks of owndership and they said, "oh sorry, get a new battery." So I did. And it worked for a minute, ok like 8 months off and on, and now it is again on the fritz. They will do nothing for me. It is only a year old! I hate Circuit City. I am boycotting. the end
Posted by cami rocks the blog at 9:39 PM No comments:

Getting ready for Camp!

So as nobody knows, I am getting ready to move to New Hampshire for about 9 weeks to work at Camp Walt Whitman as their music specialist. YAY! I am so excited to be able to go out and have fun meeting a bunch of new people and working with kids who want to be there...for those of you who know where I work, you know what I mean... So Glad to work with happy people and kids! The minor setback, is that I haven't played the piano in forever and so I have been practicing for almost 2 hours everyday. eh. It's coming back, but wow, I forgot a lot.

Anywho--after camp I am moving to Boston to Go to law school at New Englnad School of Law and so I have to have all of my stuff packed for school before I go out to camp so my parents can ship it out to me--or if I decide it is cheaper one of my amazing friends--Mathan GQ will maybe drive all my stuff out to me.

So I pretty much hate packing. I never realized how much useless stuff I have in my possession. It's really kind of hard to decide what come with and what doesn't! I mean, I'll be out there for at least 3 years which seems like forever even though I know it will go by so stinking fast. Oh, and I have yet to find an apartment out there so there is some more good times! Well, that is the latest. I'll get some pictures up soon, but of course my amazing camera that I have had for just over a year is a piece of crap and doesn't work so...it may be a few. YAY! Camp Walt Whitman here I come! 10days. yikes.
Posted by cami rocks the blog at 10:25 AM 1 comment:

ummm, hi you need to help me figure out how to work this freaking blog! I love you long time and can't wait to hear all about Europe! Miss you!
Posted by cami rocks the blog at 11:19 AM 1 comment: