skip to main | skip to sidebar

Moth's, spiders, and bugs in general. 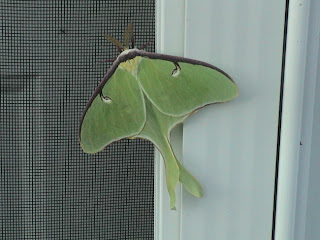 So life here at camp has forced me into a lot of reflective periods. My latest one has been about the moth. I know, random, but there are a ton of these suckers here. Most specifically, Gypsy (maybe) moths. They are beautiful! There are a lot of seriously gnarly spiders here (which I hate by the way, but we pretty much invaded their habitat so I fell a little more guilty about killing them--not that it stops me--but only if they are in my face or creeping me out!)

Anywho--Moth's--There are so many here and the other day I found my self studying them. They just come and land on you, on your computer, the piano, etc. So this beautiful moth, supposedly called the gypsy moth. It is huge and amazing. So they have furry bodies--and I was wondering about their life span and even their function in life. I have no idea what moth's are for. But the other day I saw a gypsy moth and someone had torn it's wing off and so it was dying and I started crying. I was kind of surprised by this since you know, they are a bug, but as I thought more about it, moth's are actually kind of cool.

It might just be a sign that I have way to much time on my hands because I have literally been comtemplating the life of a moth. I know, but there are so many bugs here and Moth's seem to be the coolest. Anyway, I just looked at google and they are just called green moth, whatever. They are gorgeous. I felt really bad for all these moths who keep getting killed because peopel are dumb. I think maybe I need to go into like animal rights. Maybe it is bad, but I can handle people getting injured etc, over animals. I know, but aniamls are helpless. They don't deserve it...except spiders are other biting insects. hate them!
Posted by cami rocks the blog at 8:53 PM 2 comments:

So this year of course I am at camp and missed the amazing Miley Cyrus at Utah's stadium of fire---so heartbroken...eh--not. So they had all these really fun activities for the campers and stuff and there was a BBQ etc. I was kind of depressed becuase the 4th is one of my absolute favorite holidays and I really kind of wanted to be at home doing family stuff and watching the fireworks and everything. Anyway, sadness everywhere on my part--joy for the campers.

I knew that we were going to see some fireworks over the lake and I knew that would be cool but ya know, there was no way it could replace Donny Osmond singing "staduim of fire" and all kinds of stuff. SO--they started the thing with camp fire singing and they sang the usual patriotic songs--it was good--then they stated a fire in this bin--and the announced that there were going to retire a flag. I had no idea what they were talking about--but suddenly all these really cool quotes were being read about the flag--I think they were different parts of a poem--it was really cool--then they took the flag that they had flying over camp for the last 10 years and burned it. It was crazy. Everyone stood upa nd I just started bawling.

I had never really thought about what the flag stood for. I mean, we have all the usual textbook answers and stuff but if you really think about it--it has such a deeper meaning, especailly right now when the nation is in so much turmoil, and I don't just mean the war ya know. There is so much to it--with all the things that people are doing to each other, to themselves. Independence day shouldn't just be about how we broke free from Englad or whatever. It represents freedom from all kinds of oppression. Our country as a whole, we continually oppress those around us, those within our own country.

I just kept thinking about all the sacrifices that so many people have made from the beginning of time to make sure we have a free land. I kept thinking about stuff in the BOM as well about how this land will be choice as long as we serve God and it is really kind of scary to see how many people really don't. I don't mean to sound all preachy but I just really love our country and hate to see it destroy itself from within. Poverty, abuse, porn, etc, we just hurt ourselves and each other. How many of us are slaves to our addictions? Are we truly independent? I don't know, I just kept thinking about all this stuff as the flag was burned and over the last few days what freedom, patrotism, and true independence really means to me. I love America and while I plan on helping the justice system and people in general when I become a lawyer, I don't think my lack of education should stop me from doing something now. What that is I'm not sure, but I know it has to start with my daily choices. The small ones that don't appear to make much difference, but if you look back at life, it is those small details, those things you said, made, felt, that really make the moments.
Posted by cami rocks the blog at 8:37 PM 2 comments: